I got three quotes to fix my leaky basement problem and Davenport was $1,000 less than a competitor's quote and $2,000 less than another competitor's quote. They did the job very well and we no longer have water coming in our home's foundation!
Anna S. of Henderson, NV
Wednesday, September 18th
“The crew was were very awesome and did such a great job. I would highly recommend Davenport Foundation Repair in the future to family and friends. They were very professional and clean. I am very grateful for the Davenport office team in providing assistance for funding in order to stabilize my home before wintertime."
Judy W. of Woodland Hills, UT
Thursday, November 7th
Evidence of moisture upon pulling up carpet in the basement. Freaking out, called Davenport and Dave came out SAME DAY! Gave an honest opinion and no charge! I love how these guys operate!
Bryant P. of Murray, UT
Thursday, August 30th
I would like to thank you and everyone there for working with me, trying to accomplish all the extraordinary things necessary for my home and family. My 6 year old Autistic son needs a calm environment, and it is a heart wrenching situation. Your guys did a very good job and conducted themselves professionally. I wanted that to be known. I will recommend you guys to everyone I can as there are a lot of homes around me that were built by the same company on the same soil and on a slab like mine.
Thomas E. of Salt Lake City, UT
Monday, March 3rd
I'm very impressed that Frank took his personal time to come out and do a bid when there was an issue with the computer system that did not save my appointment.
David S. of West Valley City, UT
Wednesday, February 14th
The installer was very honest and let me know what was being done to lift my driveway. He was friendly and I loved his work. He even gave me tips on how to minimize any future repairs, and gave me advice on the others areas of my driveway that needed lifting. I recommend hiring Davenport Foundation Repair, and would use them again in the future.
Diane L. of West Valley City, UT
Thursday, January 5th
Thank you! Your workers are a pleasure to be around.
Sharie J. of Garden City, UT
Monday, January 22nd
I recently had Davenport Foundation Repair take care of some needed repair on the cement walkway around my garage and home.  They did a terrific job in a very timely manner.  They were helpful in their explanations on the phone with me and with my wife when they arrived at our home.  We were both impressed with their professional manner and especially with the work they completed.  I'd recommend them without hesitation.
Brian J. of Park City, UT
Tuesday, May 9th
I would like to recognize the professionalism of your employees Chase Pruett and Kevin Killpack. They did an exceptional job in completing the project. I am most impressed with the quality of their concrete expertise. Each exhibits pride and excellence in their work. They are dedicated employees. Thanks to David Kerlin for his communication and recommendations. He represents your company well. Also, thanks to Jake and Tristan—what hard workers and tenacious individuals. They took time to address any concerns and I appreciated their attention. Best Regards, Marilyn Jensen
Marilyn J. of Park City, UT
Wednesday, October 4th
I'm very impressed with how they handled everything! Dave and his guys went above and beyond! For a dirty sump pump job I was expecting a big mess but they left my house cleaner than it was to begin with! It looks great and works as it should. Super nice and very professional. I highly recommend these guys for any foundation repair or water issues.
Riley H. of Sprinville, UT
Wednesday, June 27th
I had the great pleasure of meeting and working with Dave Kerlin on my concerns of my home sinking. Dave was on time, knowledgeable, and experienced. He was able to explain and draw up a diagram of what was happening to my house and a couple different options to fix it. Thank you so much Dave for your honesty and professionalism.
Kerri R. of Springville, UT
Monday, December 10th 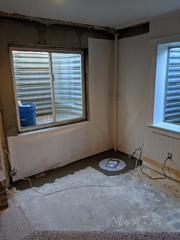 I don't write reviews very often and I rarely give 5 stars for any review, but the Davenport Team led by Nate and Kevin deserve a 5 star rating and a RAISE! We needed a sump pump installed. I received 3-quotes and the Davenport price was in the middle. What caught my attention was they said they could complete the job in 1-day. The other 2 bids said it would take 3-days and 4 to 5-days. So I questioned Davenport about this and they stated with confidence that they would have 4-guys on my job and they would be finished by 5:30pm. Well, as exactly stated, they had 4-guys work the full day on my project and they were finished at 5:20pm. Their work was great, they were very careful to cover everything in our finished based prior to doing their work and they were very courteous in all of their communication. Through this process they also educated me about a "void" that exists under my driveway and explained how that can be repaired, so I will be using Davenport again. YOU WILL NOT GO WRONG USING DAVENPORT! VERY IMPRESSED!
Craig A. of Springville, UT
Friday, July 5th
Being a business owner for the last 23 years I understand having quality people working for your company. Your Rep Chase is nothing but professional. I hire people all the time and told him if he ever wants to work for us to give us a call. Just kidding!! However he should definitely get a promotion he was outstanding to work with and the work was perfect.
Mitch M. of Mountain Green, UT
Monday, September 19th
Davenport Foundation Repair is very professional and knew what they were doing. They explained everything before starting the work. They were clean and honest. I would use them again if I need their type of work without hesitation.
Clair M. of Providence, UT
Wednesday, December 7th
I just wanted to let you know David Kerlin was so helpful and courteous. He truly went the extra mile in assessing the problems with my home. I will be recommending your company in the future.
Jan C. of Provo, UT
Thursday, July 14th
Total testimonials : 83